Commitment to excellence in service. Best in class quality. Dedication to community. Honor of legacy. CG Detroit is proud to have a roster of clients that embody not just one of these qualities, but all of them. One such client is Matheson Heating, Air Conditioning and Plumbing.

In business since 1946, the Commerce Township-based company is known for its above and beyond attitude to serving its customers. “I think one of the things that really differentiates us is that we truly partner with our customers. We are on the same team,” said Michael Matheson, President and CEO, Matheson Heating, Air Conditioning and Plumbing. “We work together to get the results they need. Our customers know we’ve got their backs no matter what comes.” 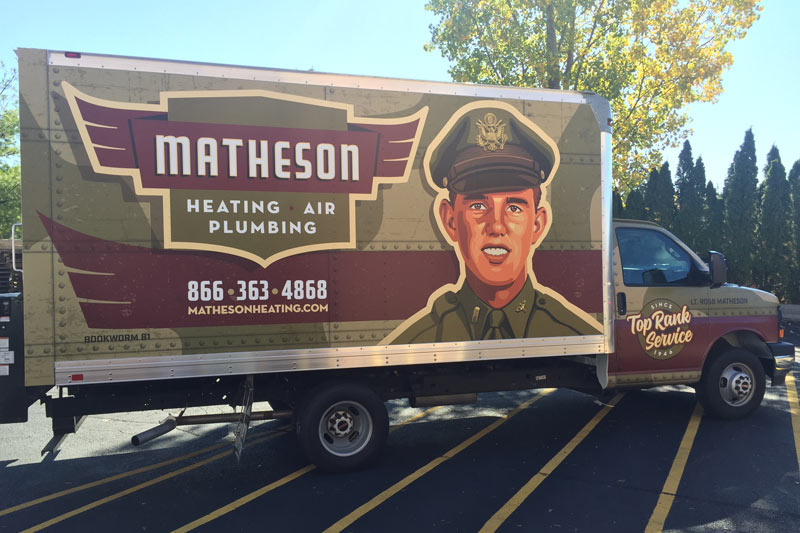 Michael and his team believe that although they need to make a living, it is their duty to watch out for those who may need extra help or not have the funds for critical items. This is particularly true during these bitter cold months. One such example is Matheson in partnership with their supplier Carrier provided a new furnace for a couple who had lost their son while he was serving in the Iraq War.

Michael holds a special place of honor and respect for those who dedicate their lives to serving our country often making the ultimate sacrifice. The company was started by his grandfather who was a Lieutenant in World War II, serving in Europe. His grandfather, like so many, returned home from the war and had to find a way to make a living and support their families. He started the company at its current location in what was, at the time, a remote, farm town.  Over the years the region has boomed and it is now situated in one of the most thriving communities in the area. “Seventy years later we are fortunate and benefitting from his dedication and sacrifice,” said Michael. “When he began it was a rough go to get the business started. There were many very difficult years… Now we are able to reap the benefits of his commitment.”

Unfortunately, Michael’s grandfather passed away in 1977 and was not able to see the success of his legacy. With that in mind, Michael wanted to find a way to truly honor him and all others in military service. The company recently underwent a major re-branding to do just that and called on CG Detroit to wrap their fleet of service vehicles.

The new look and feel features an illustrated image of Michael’s grandfather in his uniform. The colors, fonts and styles are a perfect homage to the style of the 1940s and a reminder of what those who fought endured has allowed so many of us the life of freedom we live today. The honor doesn’t stop there. Michael and his team’s fleet has been named not in a traditional number scheme manner but rather as a nod to those who served in his grandfather’s squadron encompassing their call signs. One was shot down and killed a few days before Christmas. Another was a leading pilot who showed the ropes to everyone. Each truck represents a story and soldier to be remembered.

“It is an honor to work with Michael and his team,” said Daryl Clasen, Senior Vice President/Managing Director, CG Detroit. “This project embodies the spirit of our clients. It showcases not only a beautiful, artistic brand but something that has a deeper meaning and impact for anyone who sees one of the vehicles on the road or in their driveway.”

That impact resonates with Michael as well. “Recently my brother and I went out on a call late at night to replace a water heater. As we left, we rounded the corner and there on the van was Grandpa looking at us. There’s something so special to see that,” said Michael.

Matheson offers discounts to military veterans and senior citizens. They serve communities throughout Oakland County and have won countless accolades for their professionalism. For more information visit: www.mathesonheating.com